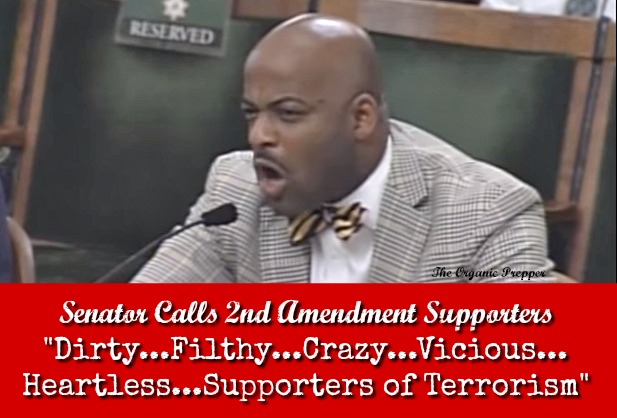 While we all know that the majority of the politicians in California are painfully liberal and terrified of guns and, well, you know, freedom, Senator Isadore Hall really raised (or lowered) the bar last week. He and another legislator launched an outright personal attack on a speaker from the NRA who objected to their sweeping, anti-Constitutional offerings in the wake of the attack in Orlando.

The first speaker, assembly member Evan Low, stated that “lives have been cut because of your organization.”

But the next person in the video went even further.

Senator Isadore Hall, vehemently (albeit ungrammatically and rather incoherently) asserted that the representative from the National Rifle Association was personally responsible for the shootings in Orlando. He accused the representative of defending the “senseless acts of terror” that occurred and suggested that a good old-fashioned mouth-washing with soap was in order.

Apparently, we, the gun owners of America, make people like poor delicate Isadore feel unsafe in his own home.

First of all, I’m a Concealed Carry Permit holder in the state of California.

To get my permit (which honestly, I never should have needed in the first place, given my supposedly inalienable right to protect myself – but that’s another argument entirely) I had to jump through a lot of hoops. Expensive, time-consuming hoops.

Only then did I receive my CCW permit. While I think the laws are excessive, onerous, and expensive, as a law-abiding citizen of the state (and one who doesn’t want to spend time in prison on felony charges) I followed every step to the letter.

The presence of my firearm has kept my daughter and myself from becoming victims of a potential crime. (You can read about it here, if you’re interested.)

And this simpering fool has the utter audacity to list off those epithets about me and people like me? Has the unmitigated gall to suggest that pro-Constitutional supporters of the Second Amendment support terror? Thinks that I am a threat to his safety?

Here’s the real threat to safety.

The real threat is cry-baby liberals who are afraid of the idea of taking responsibility for their own safety. If the rules are already so onerous that it took me 6 months and hundreds of dollars to get my permit, do they honest-to-goldfish think that criminals will follow these rules?

The only people they’ll be stopping are people like me.

They’ll be stopping me from having the power to protect myself and my child.

They’ll be stopping me from having the potential to help others.

They’ll be forcing me to be a victim without a chance of survival should I find myself in a situation like the nightclub shooting.

What they’re doing is drawing a line in the sand. Instead of fighting “terrorism” they are turning citizens against one another. They are trying to take our power with their ridiculous laws.

It’s clear that these legislators are too cowardly to take gun in hand to protect their own families, and I understand that. It’s a lofty responsibility. It’s a responsibility not everyone chooses to take. I have no problem whatsoever if one opts to depend on the good folks at the other end of the phone when they call 911 and hope for rescue.

But in order to hide their cowardice, they want to take away my power to protect my family. It probably makes them feel better to reduce us to their fragile footing. Maybe they’d feel more like men if they were able to make laws so that I will be forced to wait for 911, too.

The California Legislature is trying to make the most sexist, anti-woman policy imaginable.

They want to take away my power and reduce me to a weaker status. They want to make it more likely that I am a victim of someone bigger, stronger, and better armed. All the while, they pretend to be pro-woman? They act as though the Democrat-run state congress wants equality for women, but the very thing that puts women on equal footing is the thing they strive to take away.

The incoherent insults, the poor grammar, and the bars of soap really don’t make a point about gun owners.

A suggestion for Isadore Hall

As for me, Isadore, I carry.

I carry every day.

And I have a  suggestion about what you can do with that bar of soap you keep talking about.