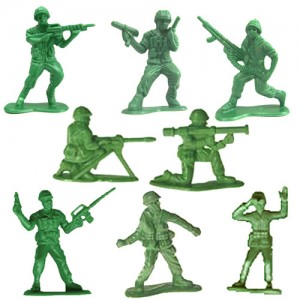 In a terrifying brush with violence, the administrators of Schall Elementary School in Caro, Michigan have boldly done what was necessary in order to protect a classroom of vulnerable 3rd graders.

They have taken a little boy’s birthday cupcakes and confiscated those frosted harbingers of evil.

Why?  you may be asking yourself.  Oh my gosh, were the cupcakes poisoned?  Were there razor blades baked inside of them, fiendishly awaiting the opportunity to cut little mouths?

They had plastic green army guys on them. With plastic green GUNS.  Can you imagine the fear the class must have felt when the container of cupcakes was opened and they saw all those GUNS aimed at them?  Can you imagine the terror?  There’s no time for a lockdown!  Those cupcakes are IN THE CLASSROOM.  They must have been simply paralyzed with fear.

“These are toys that were commonplace in the past,” she wrote. “However, some parents prohibit all guns as toys. In light of that difference, the school offered to replace the soldiers with another item and the soldiers were returned home with the student.”

“Living in a democratic society entails respect for opposing opinions,” she stated. “In the climate of recent events in schools we walk a delicate balance in teaching non-violence in our buildings and trying to ensure a safe, peaceful atmosphere.”

Principal Wright explained in her statement that she meant no disrespect to the military.

“By not permitting toy soldiers on cupcakes at school, no disrespect for our military or for the brave men and women who defend our rights to have our differences was intended,” she wrote. “Our commitment is always to our children and creating a safe place for them to learn, grow and have respectful dialogues about their differences.”  (source)

This incident follows closely after a boy was suspended for biting his Pop Tart in the shape of a gun.

Stop and think for a moment the type of children we are creating with actions like this. Political correctness has run amok.

We are teaching kids:

…That inanimate objects are scary.

…That generalizations like “zero tolerance” rules are more important than critically thinking about a situation.

…That guns are so evil anything that even represents a gun should be thrown away.

…That they should be fearful of anything outside a narrow set of liberal parameters.

Although the principal of the school defended her position and discussed having  respectful dialogues about differences, I don’t really see any dialogue here.  I see nothing but brainwashing.  I see an action that caused a big hullabaloo about nothing on a little boy’s birthday.  I see a media-driven agenda to create a generation of children who will never resist and who will accept anything that falls under the umbrella of being “for their own safety.”

What happens on the day these kids need to protect themselves and there’s no benevolent principal around to take the army guys off the cupcakes?

The schools are training a society of victims. Don’t let your child be one of them.