Las Vegas: 58 Dead and 515 Wounded in the Deadliest Mass Shooting in American History 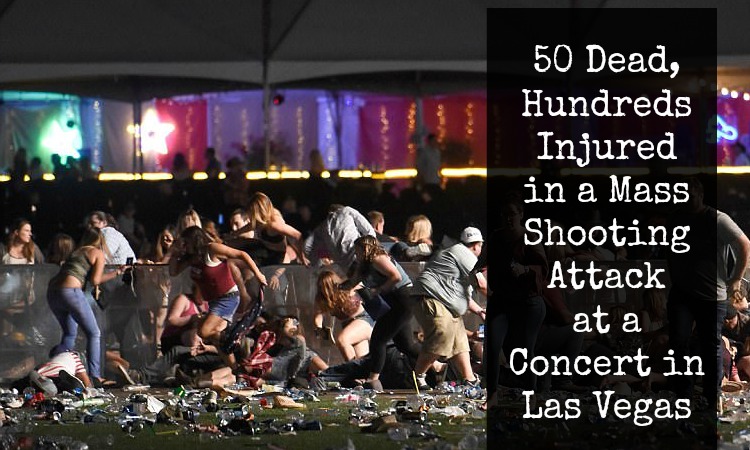 A country music concert in Las Vegas was the scene of the deadliest mass shooting in American history.

Fully automatic gunfire erupted in a sniper attack from the 32nd floor of the Mandalay Bay Hotel and Casino into a crowd below who was enjoying a concert with musician Jason Aldean. Fully automatic weapons, also known as machine guns, keep firing as long as the shooter’s finger is on the trigger.

The shooter was identified by 9 News as Stephen Paddock, a 64-year-old man from Mesquite, Nevada. He was killed when SWAT burst into his room, but his female companion, Marilou Danley, was at large for several hours. She has been captured by police but there is no word on her involvement in the shooting.

The most recent death and injury information from this horrifying event says that 58 people have died and 515 have been wounded. (source)

UPDATE: Here’s what little is known about Stephen Paddock:

The gunman responsible for the worst mass shooting in modern US history is believed to be a grandfather who lived in a remote desert home, reports Telegraph’s Leon Watson. Stephen Paddock, 64, was named by police as the perpetrator who left more than 50 dead. He was killed when officers blasted their way into his hotel room. Las Vegas police said they had located “numerous firearms within the room that he occupied.” Las Vegas Sheriff Lombardo said officers had confronted Paddock on the 32nd floor across the street from the concert. “There were at least 8 guns and a number of long rifles in the alleged shooter’s room”, per Las Vegas Police Undersheriff Kevin McMahill.

Speaking to the Daily Mail, the brother of the Las Vegas shooter said that he was a normal guy who must have “snapped.” Eric Paddock said that ‘something happened’ to make his brother Stephen kill at least 50 people and injure 200. Eric said that there was ‘absolutely no indication he could do something like this’ and said that Stephen had no political or religious affiliation. (source)

He said: ‘He was just a guy. Something happened, he snapped or something’. Speaking from his home in Orlando, Florida, Eric said: ‘We know absolutely nothing, this is just, we are dumbfounded. We have absolutely no idea. Our condolences go to the victims and all their families’…‘He has no political affiliation, no religious affiliation, as far as we know. This wasn’t a terror attack’.

More than 50 people are dead and 400 others injured. (source)

Some sources say that Paddock converted to Islam 30 years ago, but there is absolutely NO verification of that at this time.  However, in a statement that was just released by the Amaq news agency, ISIS has claimed responsibility for the massacre.

Isis has claimed responsibility for the shooting attack that has left at least 50 dead in Las Vegas.

A statement published by the group’s Amaq propaganda agency claimed the attacker was a “soldier of the Islamic State”.

“The Las Vegas attacker is a soldier of the Islamic State in response to calls to target coalition countries,” it said.

In a second statement, Isis claimed the gunman “converted to Islam several months ago”. (source)

According to Zero Hedge, the US isn’t buying it.

Below are videos of the moment the shooting broke out as well as people desperately seeking to flee or take cover.

You can read more here.

What would YOU do to keep your family safe?

In a situation so open, there were few places for people to take cover. What would you have done to stay alive and protect your loved ones in such a situation? If you ever find yourself in the midst of a terror attack, here are some tips to help you survive.