How to Make Tallow 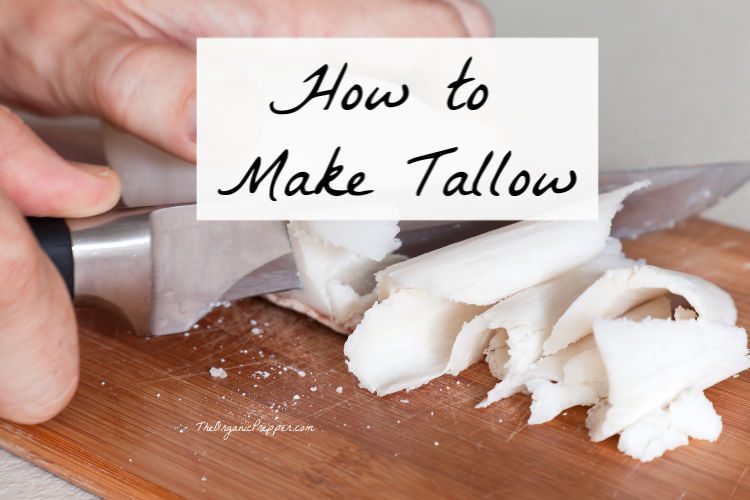 While some recipes call for removing or cutting off the fat from meats, a few require the addition of fat. Whether it is oil to coat a soft ball of bread dough, or solid fat cut into a pie crust, sometimes added fat is needed for cooking. Recently I came across recipes for well-circulated survival food, pemmican, that called for tallow, and I had no clue what they were talking about. Being from the South, I knew what lard was, but not tallow. So off to do some research.

I discovered tallow, real tallow, is the product of rendering suet, which is the white fat layer surrounding an animal’s organs; namely the kidneys and loins. But it’s also been the more modern name for the product rendered from basic beef fat and/or lamb fat as well.

Tallow has been, and still is, used in everything from soap to candles, moisturizers to lip balm, and is a source of nutrients including niacin, vitamins B6, B12, K2, selenium, iron, phosphorus, potassium, and riboflavin. From my own personal experience, I can tell you it’s pretty darn awesome.

When I was making pemmican to write my article about it, I decided to render some tallow, too.

The first thing I did was pull a few roasts out of the freezer. I’d been wanting to cook a roast anyway and, needing the fat for the tallow, I figured I’d carve the fat off the other one and can some stew with the rest of the beef. It wouldn’t be the good stuff; the fat from the organs, but it would be tallow. And since it was frozen, the fat was easy to work with and remove from the outside. The marbling inside was a bit more difficult to get to so I had to let it them thaw some to get to the rest of it.

After cutting all the removed fat up into smaller pieces about a ½ inch to an inch in size, I put them in a small saucepan and then started to cook them down. It’s recommended that this part of the recipe, making the tallow, be done in a crockpot. But I wasn’t making very much pemmican and so didn’t expect I’d need much tallow. It didn’t take me long to figure out I should have started making the tallow the day before. Turns out the fat has to be melted down slowly so as not to burn it. So, I had hours at minimum to kill.

After a little over 4 hours, I had rendered enough tallow to finish the pemmican (almost 2 cups). I only knew it was done because there were some funny looking things floating on top of a clear yellowish liquid. I was surprised it was a yellow color. Using a cheesecloth over a mesh strainer (that was in turn over a metal funnel sitting in a clean mason jar), I poured the tallow into the jar, leaving out enough for the pemmican.

It’s said that the ‘cracklins’ that are left can be seasoned and eaten, or fed to pets, but honestly, I just threw them away because there wasn’t much, to begin with, and they were mushy. I’m thinking if I’d cooked it longer, or maybe even fried them up, they might have been crispy.

Then I made the pemmican, which was easy, and began wiping my hands off on a paper towel. It was at that point I noticed the little jar of tallow I’d poured.

It was no longer yellow but almost white, and hard, at room temperature. Now, I keep my house cool – right around 69 degrees, so I totally understand that room temperature for me is cooler than it may be for others, but the grease hardening that fast was amazing to me. I then looked down at my hands and realized the paper towel just wasn’t going to cut it. Does anyone remember how an older person would tell us as kids not to pour grease down the sink because it would clog it up? This was the stuff they were referring to. Not the canola oil or the vegetable oil, or even the Crisco. Nope. It had to be Tallow. It was coagulating on my hands. Either I was dead, or this stuff was solid at 98 degrees F.

Turning the hot water knob on I squirted some homemade foaming soap on my hands and start to rub, and ended up making a soapy greasy paste. With a big sigh, I squirted some more, then some more for extra measure. Nope – not gonna cut it. My hands felt like they do after I’ve mixed up a meatloaf and put it in the pan; only they smelled like lemon instead of ketchup. I usually use food handlers gloves when I play around in food but I just had to see how that pemmican felt, and now I regretted it.

Then I spied the Dawn dishwashing detergent, remembered the slogan, and thought ‘What a wonderful time to test that!’. Twice with Dawn and some hot water and my hands were clean. At least Dawn takes this grease out of your way. My hands were clean. And soft… I cannot describe to you how soft and supple my hands were at this point. They weren’t greasy – they were soft. And – I kid you not – they looked like my daughter’s hands who’s 20 years younger than me. This was some miracle stuff!

How to make your own tallow

So, what’s the correct way to make/render tallow? You need to get some good beef fat. You can render any beef fat into tallow but the very best is called “leaf” fat, which is the fat found around the kidneys and loins. You may be able to buy the beef fat at a local butcher or even grocery, but if you can, try to make sure it’s grass-fed with no antibiotics and such. The better quality your source, the better quality your product.

Then you need to have the following:

Using cold fat, trim it well of any meat, gristle, etc., and cut it into small pieces. Some people recommend running it through a blender or food processor to break it up better but you don’t have to – it will render either way. Put the fat into your pot and turn it on very low – it’s extremely important that the fat melts, not cooks or burns. Put the lid on and remember to stir it occasionally. Over time you’ll start to see small pieces, ‘impurities’ or ‘cracklins’, float to the top. When the bottom of the pot is all liquid and all the solids are floating on top it’s done.

Carefully remove the ‘floaters’ and transfer your liquid tallow into jars or baking dishes. If you choose jars you can put the lid on them a store them in the fridge or freezer. If you want you can pour it into baking dishes and cut it into squares when it cools, storing the squares in containers or freezer bags then the fridge/freezer.

Have you made tallow? How do you use it?

Tallow is great for frying just about anything you want to fry, and I’ve heard it’s better than commercial solid greases for pie crusts and other baked goods. I plan on using what little bit I have left on the dry callouses on my feet. Then I’m going to make more!

How about you? Do you use tallow? What do you use it for? Have you made it before or you considering making any? Let’s talk about it in the comments.