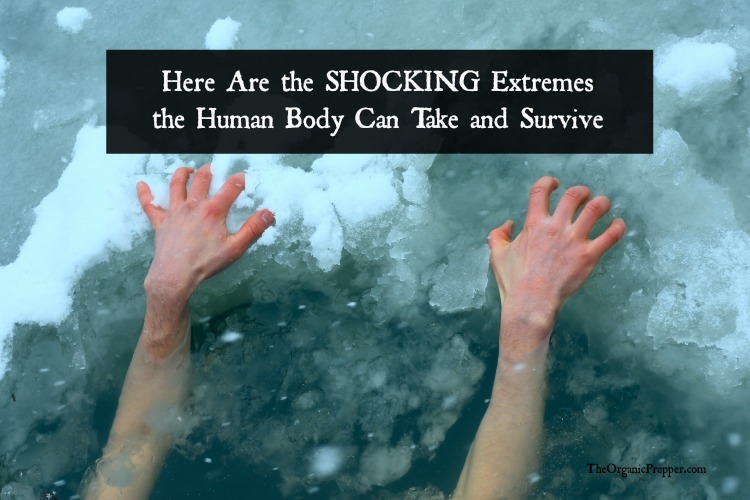 But many people have tested the boundaries of human ability and resilience – some intentional, some accidental – and lived to tell their stories.

You likely have heard that generally speaking, humans can survive three minutes without air, three days without water, and three weeks without food (the “rule of threes”).

Actual limits to human survival have not been established for obvious reasons – it isn’t exactly ethical to test how long people can survive without sleep, water, air, or food.

However, we can learn from people who HAVE survived incredible events and lived to talk about them.

Humans are capable of astounding feats, including some that seem to defy everything we know about the body. Consider the following documented athletic achievements:

Athletes aren’t the only people who have done impressive things.

Every once in a while, you hear about a person who has done something that seems to defy all odds.

Here is a compilation of incredible human accomplishments and tales of survival.

Firefighter Chris Hickman lifted an SUV 12 inches off the ground in 2008, allowing other rescuers to pull a pinned woman to safety.

Roy Sullivan, a park ranger in Virginia, was struck by lightning seven times – the most on record.

The heaviest human ever was Jon Brower Minnoch, who weighed an estimated 1,400 pounds.

Juliane Koepcke survived an ordeal that some call a “double miracle”:

On Christmas Eve, 1971, an airplane departing from Lima, Peru, was struck by lightning and broke apart midair. The accident killed every person on board, with the exception of one…a teenage girl named Juliane Koepcke. It was a miracle that she survived the plane crash, but she still needed a second miracle to help her survive alone in the dangerous Amazon rainforest. She got it. After eleven days in the rainforest and overcoming terrible conditions, Koepcke was rescued. Most people never encounter one miracle in their lifetime, but in the span of a week and a half in 1971, Koepcke experienced two miraculous survivals. (source)

Harrison Okene was the sole survivor of the Jacson-4, a tugboat that overturned after being battered by heavy swells off the coast of Nigeria in 2013. Eleven other crew members died as the vessel sank 100 feet down. Okene survived for 60 hours in a 4 square foot air bubble. Here is the incredible footage of Okene’s rescue (watch closely beginning at the 5-minute mark – you will see the Okene reach out to grab the rescue diver’s hand).

What are the extreme limits the human body can handle?

While science and medicine have done their best to tell us how much our bodies can handle, there are people who have experienced events that seem to challenge those parameters.

The human body is pretty good at regulating its own thermostat, with a normal core temperature between 97˚F and 99˚F. On average, normal body temperature is 98.6˚F (37˚C). To maintain this temperature without the help of warming or cooling devices, the surrounding environment needs to be at about 82˚F (28˚C).

If your body temperature drops to 95°F (35°C) or lower, you have hypothermia, a condition that can potentially lead to cardiac arrest, brain damage, or death.

If your body temperature reaches 104°F (40°C), you have hyperthermia. If it rises as high as 107.6°F (42 °C), you can suffer brain damage or death. Heat kills more people on an annual basis than any other weather-related factor.

How long it takes to perish from extreme body temperatures varies, as Live Science explains:

Most humans will suffer hyperthermia after 10 minutes in extremely humid, 140-degree-Fahrenheit (60-degrees-Celsius) heat. Death by cold is harder to delimit. A person usually expires when their body temperature drops to 70 degrees F (21 degrees C), but how long this takes to happen depends on how “used to the cold” a person is, and whether a mysterious, latent form of hibernation sets in, which has been known to happen. (source)

Regarding the possibility that humans may have a latent ability to hibernate:

Occasionally, seemingly miraculous cases of humans going in and out of hibernation-like states are reported. In 2006, for example, a 35-year-old man was rescued on a snowy mountainside in Japan 24 days after going missing. He seemed to have survived by entering a state of nearly suspended animation: His organs had shut down, his body temperature had dropped to 71 degrees, and his metabolism had slowed almost to a standstill. Subsequently, the man made a full recovery.

A cell biologist named Mark Roth and his colleagues at the Fred Hutchinson Cancer Research Center in Seattle think that a gaseous compound called hydrogen sulfide may be the key to suspended animation. (source)

“Nobody is dead until they are warm and dead.”

Anna Bågenholm survived after a skiing accident in 1999 left her trapped under a layer of ice for 80 minutes in freezing water. She was able to find an air pocket under the ice but suffered circulatory arrest after 40 minutes in the water. During this time she suffered extreme hypothermia and her body temperature dropped to 56.7 °F (13.7 °C), one of the lowest survived body temperatures ever recorded in a human with accidental hypothermia.

Dr. Jel Coward, a GP in Tywyn, North Wales, and an expert on wilderness medicine, told the BBC that people suffering from extreme hypothermia often gave the impression of being dead, particularly as it can be difficult to detect breathing or a pulse:

“This case really does bring it home to us how cautious one has to be before diagnosing death in people who are cold.

There is an old saying that nobody is dead until they are warm and dead.” (source)

Humans (all mammals, actually) have a mammalian diving reflex which is the body’s physiological response to submersion in cold water and includes selectively shutting down parts of the body in order to conserve energy for survival.

How high can we go?

At elevations higher than 15,000 feet, consciousness starts to fade – that is, unless you are acclimated. This is because we tend to pass out when the pressure drops below 57 percent of atmospheric pressure.

Climbers can withstand higher altitudes because they gradually acclimate their bodies to the drop in oxygen, and people who live at elevations above 8,000 feet have adapted to lower oxygen levels as well.

Altitudes above 26,000 feet are referred to as “dead zones” because no one can survive long at that elevation without an oxygen tank.

How long can we go without food and water?

Despite the “rule of threes” adage, there aren’t any hard and fast rules about how long we can survive without food or water, Healthline explains:

There are some studies that explore old research on starvation, as well as examine more recent occurrences of starvation in the real world. These instances include hunger strikes, religious fasts, and other situations.

These studies have uncovered several observations about starvation:

An article in Archiv Fur Kriminologie states the body can survive for 8 to 21 days without food and water and up to two months if there’s access to an adequate water intake.

Modern-day hunger strikes have provided insight into starvation. One study in the British Medical Journal cited several hunger strikes that ended after 21 to 40 days. These hunger strikes ended because of the severe, life-threatening symptoms the participants were experiencing.

An article in the British Medical Journal concludes that those who are of a normal weight will lose a higher percentage of their body weight and muscle tissue faster than those who are obese when starving during the first three days.

According to the journal Nutrition, women’s body composition makes them able to withstand starvation longer. (source)

Here are more fascinating facts about the human body and survival.

Humans are bioluminescent. The reason you haven’t noticed your family and friends glowing? The light just isn’t perceptible to the human eye.

Your brain can survive for five to 10 minutes without oxygen.

Stomach acid can dissolve metal. If it touched your skin, it would burn right through it.

At some point, you may have fought cancer.

While awake, your brain produces enough electricity to light a lightbulb.

You carry, on average, about four pounds of bacteria around in your body. Less than 1 percent of bacteria can cause illness.

The highest recorded fever ever was 115 degrees Fahrenheit.

The human brain has a memory capacity which is the equivalent of more than four terabytes on a hard drive.

Have you heard any survival stories that make you question the limits of human resilience? Please share your thoughts in the comments.