Survival Saturday is  a round-up of products, the week’s news, and recommended reading material for folks who are interested in being prepared. This week, it seems as though a global collapse is close at hand, with crises pending in the European Union states, Venezuela, and here in the United States.  As well, there’s a dose of millennial angst and subsequent reality checks.

Self-reliance is more essential than ever.  If the predictions of experts are correct, we’re facing an economic crisis of proportions unseen in nearly a decade. The only way to survive it is to become self-reliant. Even if you’ve never considered planting a garden before, it’s important to begin the learning curve of producing some of your own food. These courses are a great way to learn to grow food. I have taken Seed Starting and Year Round Gardening myself and strongly recommend them. (And it’s on sale right now!)

Store food. What’s better than money in the bank? Well, lots of things, really, but storable, long-term food is one of the best investments you can make.

I stock NuManna foods for emergencies because a) they are non-GMO and free of many of the nasty additives of competing products, b) the food tastes great and is quite versatile, and c) you can get a gluten-free bucket, which is vital in my family.

Is Europe collapsing under the weight of hundreds of thousands of refugees? According to this report, the clock is ticking. “EU migration commissioner Dimitris Avramopoulos warned that the bloc has just 10 days to implement a plan that will bring about “tangible and clear results on the ground” or else “the whole system will completely break down.” Seven countries have instituted strict border enforcement, leaving Greece to bear the brunt of the influx. Countries who welcomed apparently desperate people are now under siege as the asylum seekers systematically rape their women.  Norway has warned Sweden that they will defy the Geneva Convention and refuse refugees when Sweden seeks to deport half of the more than 160,000 refugees they have taken in over the past year.

Venezuela is violently breaking down. When a country reaches the state of complete economic collapse, the breakdown goes much deeper than just poverty. Read about how the Venezuelan government is dealing harshly with dissenters and anyone they feel “might” be protesting. “Throughout last night, panicked people told their stories of state-sponsored paramilitaries on motorcycles roaming middle class neighborhoods, shooting at people and  storming into apartment buildings, shooting at anyone who seemed like he might be protesting.” If you need to catch up, this article gives a quick history of the collapse that has inched along incrementally down this path until recently.

Astonished millennial fired after publically posting an open letter of complaint about her job.  I read in disbelief an angst-filled viral post last week written by a woman in her mid-20s. In the post, this poster child for entitlement decried the fact that she had a job with such low pay that all she could afford to eat was a bag of rice she had purchased before taking the entry-level position in one of the most expensive cities in the US. She wrote (emphasis hers), “Then, after I had moved and got firmly stuck in this apartment with this debt, I was told I’d have to work in support for an entire year before I would be able to move to a different department.”  Ummm yeah. It’s called working your way up, hon. Most of us have done it, including this enterprising young woman who responded with a hilarious, well-written smackdown.  To her apparent astonishment, she has now learned that the real minimum wage is $0, since she lost her job shortly after the post and some poorly conceived tweets to the CEO of the company.

What the heck is wrong with these young whippersnappers? (I used that term because I sound like I’m ancient, complaining about the younger generation.) First of all, they’re incredibly coddled, and this is by design. Last year, I wrote a list of 25 things we did as kids that would get someone arrested today that developed our senses of adventure and kept us from being a generation of weenies. I am also starting to think a major issue is our colleges and universities, setting young people up with unrealistically entitled expectations and safe spaces. One glowing exception is this university, which actually offers a class for college credit on survival skills.

Please get prepped for the economic crisis on the near horizon. I keep saying this, but our own economy is doomed. It may seem like the crisis is distant, but that is because those in financial power keep kicking the can down the road with things like quantitative easing and bailouts. But, it’s coming. If you wait until it’s happening, then you will have waited too long. It’s difficult to say whether we’ll go down the same path as Venezuela, but it’s essential to get yourself prepared. The stock market is incredibly volatile as the economic system struggles to survive, 13 of the biggest retailers in America are closing stores (including Wal-Mart, which you would expect to survive like a cockroach after a nuke in the event of a crumbling economy), and every expert out there has been ringing the warning bell for months. First, invest wealth in precious metals – silver seems to be a strong bet right now. Then, whether you consider yourself a prepper or not, get ready to become self-reliant if you don’t want to suffer from hunger and crushing poverty. 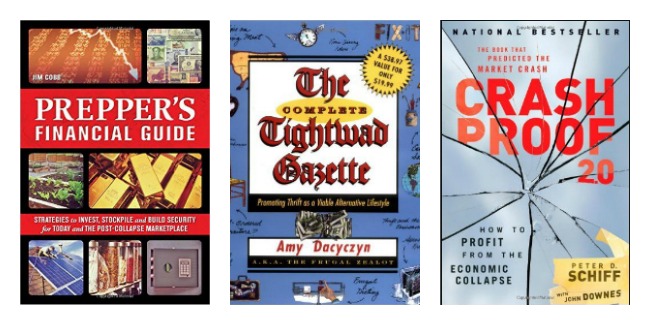 This week, the bookshelf topic is money. Are you ready for a dramatic change in the economic structure of America and your own personal financial situation?

The Prepper’s Financial Guide: Strategies to Invest, Stockpile and Build Security for Today and the Post-Collapse Marketplace: Jim Cobb is one of the most prolific voices in  preparedness publishing and his book on getting ready for an economic collapse will not disappoint you. While the other books on the Bookshelf this week provide a view from inside the economic industry, this book is pure prepper. Even if you have no horse in the race of high finance, this will help you to get ready for the inevitable crisis that will follow a crash.

The Complete Tightwad Gazette: This book was absolutely pivotal in my life and although it is more than 20 years old, the content will help you ride out the economic collapse.  Learn what hardcore frugality is really all about in this book written with warm humor, charming illustrations, and a bucket full of common sense. For many of us, the economic collapse has already begun, and embracing a frugal lifestyle can get you through some very rough times. This is my favorite book and I think you’ll enjoy it just as much as I did.

Crash Proof 2.0: How to Profit From the Economic Collapse: Peter Schiff is one of the leading voices in economic prognostication. In this second edition of his popular book, he picks up where he left off in the last book and explains in easy-to-understand language the factors that will affect your future financial stability and offers a specific three-step plan to battle the current economic downturn.  This book is particularly good for those who have investments while still providing a pertinent overview of the market and how it affects us to those who do not.

Add It to My Bookshelf

For more great round-ups, check out these two weekly features: 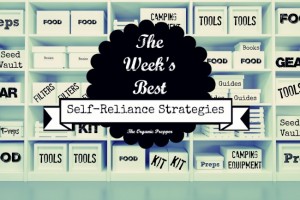 In the last weeks of winter, you can sometimes find yourself in limbo. You’re itching for spring and the smell of the freshly turned dirt, the magic of planting seeds, and the good weather to get outside and have some fun. Meanwhile, it’s still cold, possibly slushy, and definitely too soon to plant or bring home baby animals for the farm in most areas. This week, the Self-Reliance Weekly Report is about taking some time to audit your self-reliance, get organized, and plan some projects. (And if you’re getting a big tax return, that might help fund your efforts.)

The Self-Reliance Weekly Report links you to all the best articles relating to prepping, homesteading, DIY, and independence.

Click here to check out the Organization Edition of The Self-Reliance Weekly Report! 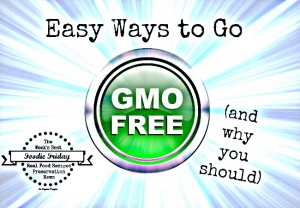 Want to make your kitchen GMO-free? This week’s Foodie Friday round-up is loaded with news, tips, and recipes that can help make it happen!

With a site name like “The Organic Prepper,” it probably comes as no surprise that I strive to avoid the inclusion of GMOs in the food that my family consumes, and after several years of effort, we’re pretty much GMO-free. We don’t depend on labeling to avoid GMOs, but on a series of easy strategies that anyone can use.

Click here to check out this week’s GMO-Free edition of Foodie Friday.

Do you have any news links you want to share? Now’s the time! Please post your links in the comments below and also, let me know how you feel about the articles that I shared. Have a fantastic week!

How People Survive (Or Not) in a Collapsed Economy