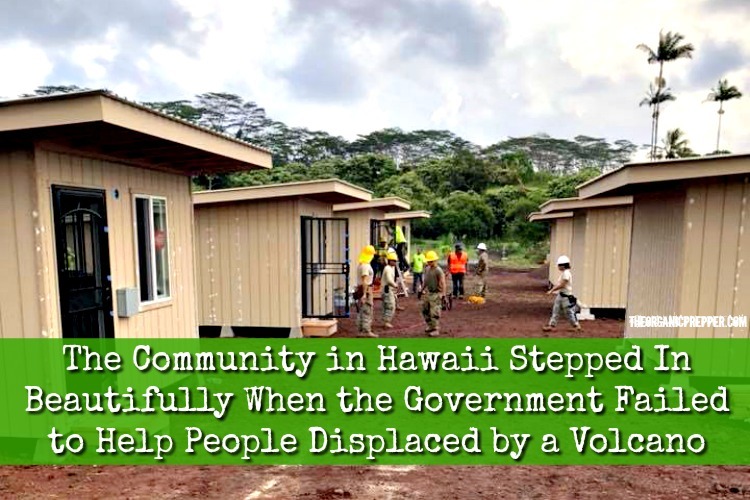 People living in Hawaii weren’t happy with the “solutions” provided by the government for people displaced by Kilauea’s lengthy eruption. So instead of complaining, they banded together as a community and solved the problem themselves.

The eruption of Kilauea displaced thousands of people.

Starting in early May, and following a bevy of earthquakes, lava began flowing forth from the Kilauea volcano on Big Island, Hawaii. For about three months, it spewed forth lava, ash, and sulfur gas. Aside from the lava, another threat from volcano eruptions is called laze (that’s a mashup word of lava + haze). Laze describes the mixture of lava and haze that contains hydrochloric acid and volcanic glass particles.

A month later there were 500 earthquakes reported in one weekend alone. Lava flooding destroyed 5,000 acres of land and around 600 homes in Puna. The Hawaii County Civil Defense warned reporters to keep at least 1,000 feet away from lava because laze is a dangerous substance to breath and gets into eyes. But perhaps more scorching is that by the first week of June, thousands of residents who had been warned to evacuate by authorities were still left displaced after all that time. Some people who were warned to evacuate took their chances and remained near the volcano because they simply had nowhere else to go.

The volcano didn’t start slowing down its eruptions until August. Pāhoa in the Puna District was especially affected, leaving residents in a constant state of uncertainty.

And of course, the government failed to provide sufficient relief.

It’s no secret that the government – more specifically – FEMA, often fails to act adequately or quickly enough when disaster strikes. FEMA has been cited in on-the-ground reports to turn community help away when people bring food, citing ridiculous regulations. Yet some of the food they provided after Hurricane Matthew was allegedly mal-nourishing and didn’t meet basic calorie requirements. To make matters worse, a year after the hurricane, the crumbling infrastructure still needed repair and families still needed help – yet FEMA froze the Matthew fund, to send those monies to other, more pressing hurricane relief efforts.

Authorities in Hawaii were reportedly scrambling to find adequate short and long-term shelter for lava evacuees. If they did scramble, they apparently did not come up with an efficient solution because thousands of people were left without a home over a month later.

It has probably occurred to you many times, that the people themselves often to come to their neighbors’ rescue more quickly and efficiently than the government. People are quite capable of rescuing themselves especially with a caring, helping hand from a familiar face who rapidly appears on the scene. Yet, the government has disempowered people to an embarrassing degree. Furthermore, the government often blocks real attempts to bring relief.

A prime example of the government telling people they cannot help themselves is during the Cajun Navy rescue efforts in Louisiana. After heavy rainfall, the state flooded in August 2016 and people known as the Cajun Navy got in their boats and rescued flood victims. Not only did the government actively try to stop community rescue efforts, but it also charged people permit fees for attempting to fix up their own properties!

Another more recent example of how some people take action instead of waiting in the lurch for government superheroes *cue the sound of crickets*, was when a Puerto Rican man took his bucket truck and began fixing wiring after Hurricane Maria wiped out the electrical grid. The government really can’t blame him for getting involved – he did wait eight months in the dark!

Worst of all, the FEMA-provided trailers for Katrina victims were later found out to be incredibly toxic and riddled with contamination that was demonstrated to be a major cancer risk – and the Katrina survivors are still living in them. If that doesn’t make you shudder at the phrase, “We’re from the government and we’re here to help”…

Currently, there are tiny homes to serve as “mother-in-law apartments” and tiny homes made with glass to serve as nature-loving, glamorous camp destinations (otherwise known as “glamping”).

So why can’t tiny homes be used to shelter people after a traumatic disaster?

After weeks, hundreds and hundreds of residents still found themselves in a state of displacement. In fact, it took at least five weeks for the government to announce that it would give $12 million dollars to help disaster victims. But with the government in over its head on how to provide shelter, the community banded together to rapidly build 20 micro houses in early June.

The beige, metal shed-like structures are 120 sq ft., fit on 8 acres of land and serve as community bedrooms for the elderly and those under 18 years old.

Although the micro-shelters themselves do not have electricity or running water, there are two 8×8 structures used for communal bathrooms with showers and also a structure that serves as a common area. The area is now called Sacred Heart Shelter.

“Never heard of anything this quick, this fast, this much people involved,” said Gilbert Aguinaldo. The owner of Big Island Electrical Services. Aguinaldo had never seen anything come together so quickly in all his career. Aguinaldo was especially inspired by people’s outpouring of help and believes this is what instilled hope in evacuees that everything would truly be okay.

“This community’s response is an impressive example of how rapid relief architecture can take form when a community bands together,” wrote Curbed.com.

Hope Services Hawaii is a faith-based non-profit that spearheaded the project. The organization teamed up with Habitat for Humanity, Sacred Heart Church where the shelters are located, and many businesses and unions made up of around 200 volunteers. Hope Services plans to complete similar projects on other construction sites as soon as they become available.

“The goal is to view this as a revolving door,” Darryl Oliveira, safety manager at HPM Building Supply, said to Hawaii News Now. He is just one of many businesses who pitched in. His company donated the 20 sheds that were used to construct the micro-shelters. “People coming in here having the time and opportunity to sort through things find permanent solutions and do it in a private secure setting.”

It can’t be said enough that this effort was originiated by members of the community. Everything here is donated. The materials, the equipment, the time, the resources.

Indeed, there were volunteers who stayed with the sheltered evacuees to help them find permanent homes as soon as the village opened up again.

We completed 20, 10’x12’ structures from 8am till 5:30pm for our displaced neighbors due to lava inundation. I am extremely exhausted

???? but am happy that we were able to complete it!
I’d just like to take this time to thank all of the volunteers, companies & those who donated drinks, snacks & food. Especially Lunch.
I’d also like to thank the people who are sheltering the displaced animals as well. A few of you showed up to pickup the usable materials that was gonna go to the landfill. I hope that you use the materials wisely.
ALOHA!

Coincidentally, parts of Hawaii have experimented with building tiny homes months before the Kilauea volcano erupted, as a way to withstand the tense rental market.

Other efforts to provide housing during a disaster include a company called HiveCube, that made prefab container homes, some of which went to victims of Hurricane Maria.

Of course, FEMA requires a physical address in order for disaster victims to receive funds – and some of these tiny homes or containers will not receive an address from the government. Now I think we are starting to see the problem… (To be fair, Hawaii’s Office of Housing is accepting help to find more sites and materials for more shelters.)

But tiny homes, micro-shelters and shipping containers all beat sitting outside in the cold or getting cancer in a toxic trailer. And it shows that people can stand up and help themselves – and each other – in record time.