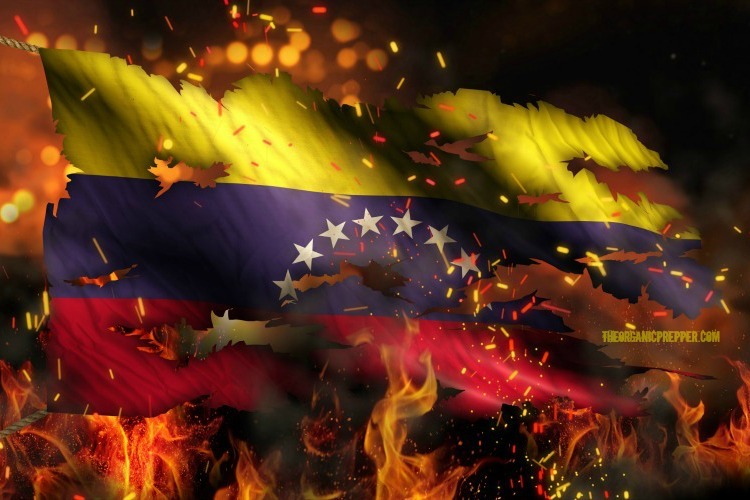 I have a certain degree of acceptance for some things. However, these last two weeks my ability to be surprised has been superseded. The price increase in everything and the difference between the salaries in Venezuela is something unbelievable. How the people have not started to burn down government buildings is a mystery for me.

This is no political analysis; is a common sense article. If a gang of thugs arrived in your neighborhood and started to charge fees and ration food, electricity, water, and gas, how much time would be necessary for the neighbors be so pissed off to start shooting? Even without guns they would make a huge mess.

But I believe that our gene pool was decimated thoroughly, and our civil wars consumed already the warrior genetics needed to get rid of that coward gang, that shoots in the head a pregnant woman like they did with the wife of the Rebel Pilot, Oscar Perez one year ago.

We need to be aware, even those with the most combative genes, of everything that comes after an economic collapse. Good military can become rogue. Jail gates can be opened, and the worst of the worst can come out, after paying a good fee to some corrupt employee that needs the money to get his family out of the city. Entire supermarkets can start to close their doors and refuse to sell if things get really nasty. The managers and employees will buy whatever is left on the shelves if they can make it safely to the shops.

Inmates have been freed as a control mechanism.

In the last days of the WWII, Hitler´s officers gave the orders to open the gates of jails, gave old, ragged army uniforms and an assault rifle to the inmates, and assigned to the regular troops the immediate execution of any inmate that tried to escape or refuse to fight.

Just for the record, the mafia in Venezuela did not need a war as a excuse. The worst of the inmates roam freely because they are being used as a control mechanism for society. This had been happening for some time, but now the jail in my former city is just a market. The relatives of the inmates can go inside and have access to products at low prices.

If you don´t believe me, just do a little research about what happened to Kellog’s. Feel free to contact their CEOs, and ask them for an explanation about the blackmail that the inmates had over this company, and why they left. The criminals got into every aspect of our former structure. In the maintenance of the oil industry facilities, they control who gets signed for work, and who does not. Engineers and technician have to work with thugs that have been in prison.

This is no joke. Union “leaders” support this. Payments in the plant maintenance temporary contracts are very good, and they need this for their vicious lifestyle. The union gets part of the money by putting them to work. Good, skilled and honest men and women are out of the game. This is even sponsored by managers and high-ranking personnel, of course. They know this happens, and they don´t care, plain and simple.

It seems that our culture has become a devotee of those who have been in prison, or should be. It means an automatic respect, when it should be all the contrary. This is just one of the things that is plain wrong with our society. Whenever I started to notice how the military and police started to see with bad eyes to civilians with guns, I knew things were going to get very bad. Especially after seeing in the news, almost one or twice a month some officer of some corp getting killed or shot by their fellows while robbing or kidnapping someone. One of the reasons to keep myself somehow in the shadows is because some members of my own extended family suffered this situation years ago. They could manage to get out of it, though.

What I’m hearing from friends back in Venezuela

The reports I have been receiving are mostly from friends and relatives concerned about the economy. I explained to them that it is just the consequence of a depopulation plan being applied. Many Venezuelans still believe that Maduro is an inept moron. Far from that, fellows. He is a clever guy. Not clever enough to take care of his own health, and getting as fat as a whale (hopefully this should be helpful for us, a lethal stroke would be very welcome these days) is a proof of this.

As I mentioned, he is clever, and in my personal opinion, he is just another one of the bunch of sociopaths that rule the sadistic gang that has imprisoned our young members of the Special Forces, and has jailed to every patriot with a uniform that has raised his/her voice. Jeez, I wonder who they will go after when the last one is in jail. The Venezuelan Boy Scouts Association?

I am pretty sure that you are already aware of the sadistic Delcy R. (the Vice President of Venezuela) explaining that the Revolution was a REVENGE because of the killing of their father, Jorge Rodriguez, who was tortured by the police of those days after William Niehous, the CEO of the Owen Illinois was liberated. Rodriguez died, and the police responsible went to jail because of that. But Delcy and Jorge grew up and studied in good schools, and later good colleges. No one knows where they got the money for that: Jorge Rodriguez’s father was not a wealthy man.

He was just a guerrilla operator, that combated the “imperialism” and the “capitalism”. Their aunt took care of them and this remained as a secret until now. The money paid as a ransom for the Niehous liberation never appeared, of course. My theory? This money was right to the hands of the very same criminal organization that worked so hard to provide the Rodriguez with their vengeance.

No, Venezuelans do not deserve this.

I write about this, because of my concerns about seeing some comments that we deserve this. Fellows, back then when Niehous was kidnapped and Jorge Rodrigez Senior died, tortured by the police to tell where the ransom money was, I was not even born.

It is not common sense to say that me and my family, and thousands of other innocent Venezuelans, deserved to receive the vengeance of those psychos.

I take the time to explain all of this, instead of providing some survival advice, because I need you to understand the climate that has been generated, and the kind of persons that worked for that. These are evil, Machiavellian, clever, and unscrupulous sociopaths. They don´t care about their reputation. About if what they do is wrong. About the consequences. About the collateral damage.

They have an agenda, written overseas.

They assigned all the members of that gang to achieve it. They provided all the necessary means: guns, money and trained mercenaries. Free access to our identification system, so the Cubans, Iranians, and North Koreans could be provided with Venezuelan passports. Our passport gave these agents access to over 170 countries, did you know? Do you believe now that this is a “bad government”, and that the crisis is generated by “bad choices” of the Venezuelan population?

This is the beginning of a war against the free world.

This is something that could be called the initiation of a war against the free world, and we were right in front of the money chest they needed to start it.

The total destruction of our oil industry is what intrigues me the most. And it is a very solid proof of something: they were not interested in keeping it running. It generated prosperity and wealth for the entire country, and they needed to sink everyone in misery, to control them throwing them a crumble of bread.

I heard in a movie of one of my favorite actors (Nicholas Cage) a phrase of one of the characters playing as a radical extremist that goes something like “The last hope of the Islam is the leftist revolution” or something very similar. This is no joke. In Trinidad island, intelligence services took over extremists already provided with Venezuelan passports. I don´t think that the VP of the country is a guy with an arabic name, neither.

Please let me know what you think. I would be more than pleased to hear your opinions.

I want to apologize to all our readers, as I have been dealing with some paperwork to legalize my presence in this country, and had to travel a little, disconnecting myself from the grid for a few days.

I would like to finish with a special greeting to those who have sent their assistance, so I can keep providing to my family a decent meal in the table every day, and a roof over our heads. Without you, this would have been a much harder test.

God Bless us all, people.