Are You Ready for the Most Politically Tense Thanksgiving Ever? 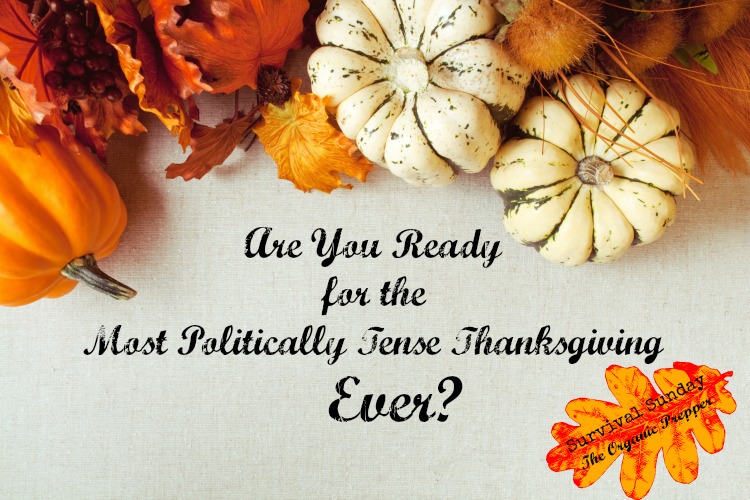 Survival Sunday is a round-up of the week’s news and resources for folks who are interested in being prepared.

Welcome to the Thanksgiving Week edition of Survival Sunday. Are you all set for some tense conversations around the dinner table on Thursday? (You might want to invest in this sign.) As interested as I am in politics and current events, I’m going to strive to keep our family Thanksgiving an argument-free zone. I hope that you are all able to enjoy a peaceful holiday with the ones you love.

On to Survival Sunday. We’ll talk about  another reason to stay home on Black Friday, discuss some common foods you’ll want to avoid due to the findings of a new report, and take a look at the whole “fake news” kerfuffle. We’ll also look at some tips for keeping peace and enjoying Thanksgiving Day.

If you needed another reason to stay home on Black Friday, here it is.

If you were thinking about battling it out for the deals on the day after Thanksgiving, you might want to reconsider. It may be even worse this year than the usual historic chaos. The FBI is warning law enforcement agencies across the country that there is an increased risk of a terror attack in America right around Thanksgiving.

CBS News reported on the warning:

And potential tactics could include guns, IEDs, or drones equipped with IEDs.

Earlier in the week, NYPD warned that the Macy’s Thanksgiving Day Parade was suggested as an “excellent target” in the Islamic State’s propaganda magazine Rumiyah on Nov. 11. The department has instituted safeguards to prevent the possibility of a vehicular attack.

As usual, the best way to avoid the potential danger is to steer clear of crowded areas and “target-rich” environments. However, if you find yourself in the midst of an attack, here are some strategies that can help you survive.

Are you feeding your children weed killer?

Of course, you’d never do it on purpose, but a new study shows that you might be doing so inadvertently – and in great quantity. Cheerios have long been a finger food that parents give their babies. They’re considered to be wholesome, low in sugar, and great for Baby’s manual dexterity.

Now, some people will say that is an overstatement, but a new study discovered that Cheerios have more pesticide content than nearly any other packaged food. Each serving contains a horrifying 1,125.3 ppb of the weed killer glyphosate, and meanwhile, Cheerios are marketed as the perfect food for little ones. It’s important to note that small children are far more susceptible to the effects of pesticides than adults. Kids who are exposed to pesticides may have lower IQs, and they face higher risks of autism, ADHD, developmental delays, and cancer. (source)

Other foods that were discovered to contain dangerously high levels of glyphosate include Doritos, Oreos, Lucy’s gluten-free oatmeal cookies, Kashi oatmeal cookies, Ritz crackers, Lay’s potato chips and Stacy’s pita chips. You might want to leave all those off the menu this Thanksgiving.

You can read the entire report here and see the levels of weed killer in foods that were tested.

It was only a couple of years ago, that the EPA increased the allowable amount of glyphosate to be used on food crops, despite irrefutable links to toxicity, cancer, and death. It should be no surprise that this has resulted in toxic food.

Also, it’s interesting to note that the mainstream media has not picked up this story. I guess their bread is buttered with Round-up.

The Irony of the “Fake News” Witch Hunt

Is it just me or have the rest of you also seen the irony that the ones leading the witch hunt on “fake news” are the ones who are the biggest purveyors of bias? The whole thing was based on a ridiculous list created by a liberal professor and another one created by US News and World Report. These lists spread like wildfire, with the mainstream taking them seriously and writing reams of thought-provoking discourse on the topic.

But here’s the funny thing. Google was busted during the election manipulating autocomplete to make the Clintons look good. (Google denies it.) Facebook has been outed for censoring trending topics if they were conservative. CNN, the NYT, all of the networks, and the tabloid Huffington Post were all guilty of blatant pro-Clinton bias during the election and the publisher of the NYT even promised that they were going to rededicate themselves to truth and integrity.

Facebook and Google will be following in the footsteps of YouTube and taking away monetization potential from sites they deem fake. Of course, in this case, “fake” means “in disagreement with liberal propaganda,” but the attempt will be made to defund the websites out there trying to get the truth out. All of us who shared information from Wikileaks and who strive to tell the unvarnished truth will have a giant target on our backs.

Meanwhile, The Ron Paul Liberty Report has issued its own list of fake websites and fake journalists – namely, the ones that colluded with the Clinton campaign. Find it here.

Remember, when all other voices are silenced and one remains, they’re probably telling the biggest lies. As George Orwell wrote in the original preface to Animal Farm, “If liberty means anything at all, it means the right to tell people what they do not want to hear.”

Are you ready for Thanksgiving? Following, find a round-up of resources to help you have a wonderful holiday. Oh – and don’t forget the canning jars so that you can preserve your post-feast goodies!

This week, I hope that you will be surrounded by the people you love. May your hearts be filled with gratitude, even in this tumultuous time in our country.

I give thanks for you, the folks who helped me out for the past three years by reading my website, sharing your opinions, making comments, and giving advice. I couldn’t have done it without you.

What’s going on in your area? What do you think of this week’s news links?  You are absolutely welcome to post your own links in the comments below. Please join the discussion!